Interview in Pula (in English translation)

Interview in Pula (in English translation)

KENNETH R. VALPEY FROM OXFORD WAS IN PULA
AN INTERVIEW WITH A FAMOUS
PHILOSOPHER OF CLASSICAL
INDIAN THOUGHT:

"We as human beings identify ourselves as different from animals. So it is man versus animal. We hold to that distinction quite strongly within cultures, not just in India, but everywhere. In India this identification translates into, if we may say so, thinking that some human beings are less human. Also, this is not unique to India, there are long histories around the world like slavery from Ancient Greece when slaves were not considered fully human. Until 100 years ago in the West, women were considered less human beings in some respects. So this idea is very present in human culture in one way or another" says Kenneth R. Valpey.

A famous philosopher of classical Indian thought, Kenneth Valpey, at the international scientific conference "Past, Present, Future", held recently at the Department of History of the Faculty of Philosophy of the University of Pula, presented an interesting and inspiring paper entitled "Ambedkar and Gandhi on Untouchability: Two Modern Indian Efforts to Re-cast Caste".

We spoke with Valpey about his latest book, "Cow Care in Hindu Animal Ethics," the final installment in The Palgrave Macmillan Animal Ethics Series.

This scientific researcher at the Center for Hindu Studies at Oxford explained to us what the concept of "untouchability" means in the context of Indian tradition, why the cow is a sacred animal in India and how much western culture and tourism suppress centuries-old Indian traditions.

Can you tell us more about the history of "untouchables" in the traditional caste system?

Untouchability, as it was called, has a very long history in India. I do not think anyone knows for sure when it appeared. Some would say that it goes back more than two thousand years, maybe even longer. It is, we can say, a very deep-rooted culture, that is a feature of Indian culture. And of course, since India's independence in 1947 and the establishment of the Constitution of India a few years later, there have been attempts to end the practice altogether, but without much success.

Why is that so?

There are a lot of theories about this deep-seated understanding, and what I am saying in my presentation is one way we can look at it, which is that we as human beings identify ourselves as different from animals. So it is man versus animal. We hold to that distinction quite strongly within cultures, not just in India, but everywhere. In India this identification turns into, so to speak, thinking that some human beings are less human. Also, this is not unique to India, there are long histories around the world like slavery from ancient Greece when slaves were not considered fully human. Until 100 years ago in the West, women were considered less than human beings in some respects. So this idea is very present in human culture in one way or another.

What are Gandhi's views on the caste system, and what are Ambedkar's? On which points do they disagree and why?

I would say that their main point of disagreement, where they sharply differed – because they both agreed that this idea of ​​untouchability was evil and needed to be overcomed – was exactly how untouchability could be overcomed.

What does Gandhi and Ambedkar say about it?

In principle, Gandhi was in favor of the Indian caste system or varna social system (the original classical system), in which there was no idea of ​​exclusion, but there was a sense of equality with simply different specializations. For example, someone was a soldier, someone a farmer, someone a priest and so on. He wanted to maintain that system through education and eliminate the idea of ​​apostates or untouchability. Ambedkar argued that this will not work, because this varna, or caste system of what we now call Hinduism, is fundamentally wrong and therefore will never be able to get rid of untouchability. Instead, his solution, and the solution for about half a million of his followers, was to give up Hinduism and convert to Buddhism. He made it official a month before his death; so he could not carry out his plan to the end. In any case, as far as I know from what I have studied, neither his nor Gandhi's plan really got to the root of the problem in India.

Leo Tolstoy, a 19th century Russian writer, said that as long as we maintain slaughterhouses, so long will we have battlefields. In other words, war, that is, fighting between people is a direct consequence of our attitude towards animals. Tolstoy became a vegetarian.

Could speciesism and human exceptionalism underlie the causality of stereotypes about "others" among humans, as you posed the initial question in your presentation?

Well, to repeat what I said in the presentation: it seems that we, as human beings, have this tendency to perceive differences, and I think that the root of this perception is our understanding of the difference between ourselves, humans on the one hand, and non-human animals on the other.

And then we continue to treat non-human animals in inhumane ways. We kill animals unnecessarily, we assume that we can eat animal meat without any restrictions. Therefore, we humans kill about 80 billion land animals every year, not counting sea animals, fish and the like. This unrestricted killing of animals perpetuates innumerable problems, not only social caste exclusion, but also environmental problems to which our planet is increasingly susceptible.

We create such an incredible imbalance in nature, which can be documented in many practical ways. The unnecessary killing of so many animals – raising and killing animals for food – directly and indirectly, is the main cause of global warming.

Today we are witnessing a strange irony – millions and millions of people have dogs and cats as pets and treat them very humanely, and then treat other animals as food.

For example, the food industry has a great impact on environmental pollution. Is that one of the reasons?

Exactly. Environmental pollution, yes, but also the mentality of human beings that we essentially become destroyers, not creators or maintainers.

By accepting it all?

Yes. And we think that's normal. Leo Tolstoy , a Russian writer from the 19th century, said that as long as we maintain slaughterhouses, we will have battlefields. In other words, war, that is, fighting between people, is a direct consequence of our attitude towards animals. Tolstoy became a vegetarian. Today we are witnessing a strange irony – millions and millions of people have dogs and cats as pets and treat them very humanely, and then treat other animals as food. There's a kind of disconnect – people  do not really think about what they are doing. In addition, there are countless consequences – I think many diseases of people today are caused by eating a lot of animal flesh.

In Hinduism, the cow is a sacred animal. What are the reasons for this special position of the cow?

It is a broad topic. The simple explanation is that there are many benefits that cows provide to human beings. Namely, it is considered that every animal that gives milk is a mother, and therefore the cow is considered the mother of man. In India, there is an ancient tradition that people actually have seven mothers, including one's biological mother, the wet nurse, the priest's wife, the king's wife, the earth, and the cow. We do not kill a mother when she gets old or stops giving milk. Nor do we kill the father, which in this context means a bull or an ox. An ox is traditionally engaged in pulling, but about a hundred years ago this practice almost completely disappeared, and was replaced by a tractor. However, one day when there is less oil or gasoline, we will need the help of animals if we are going to farm. So, for breeding purposes and for nutrition, for milk, cows – cattle are considered very valuable in India. 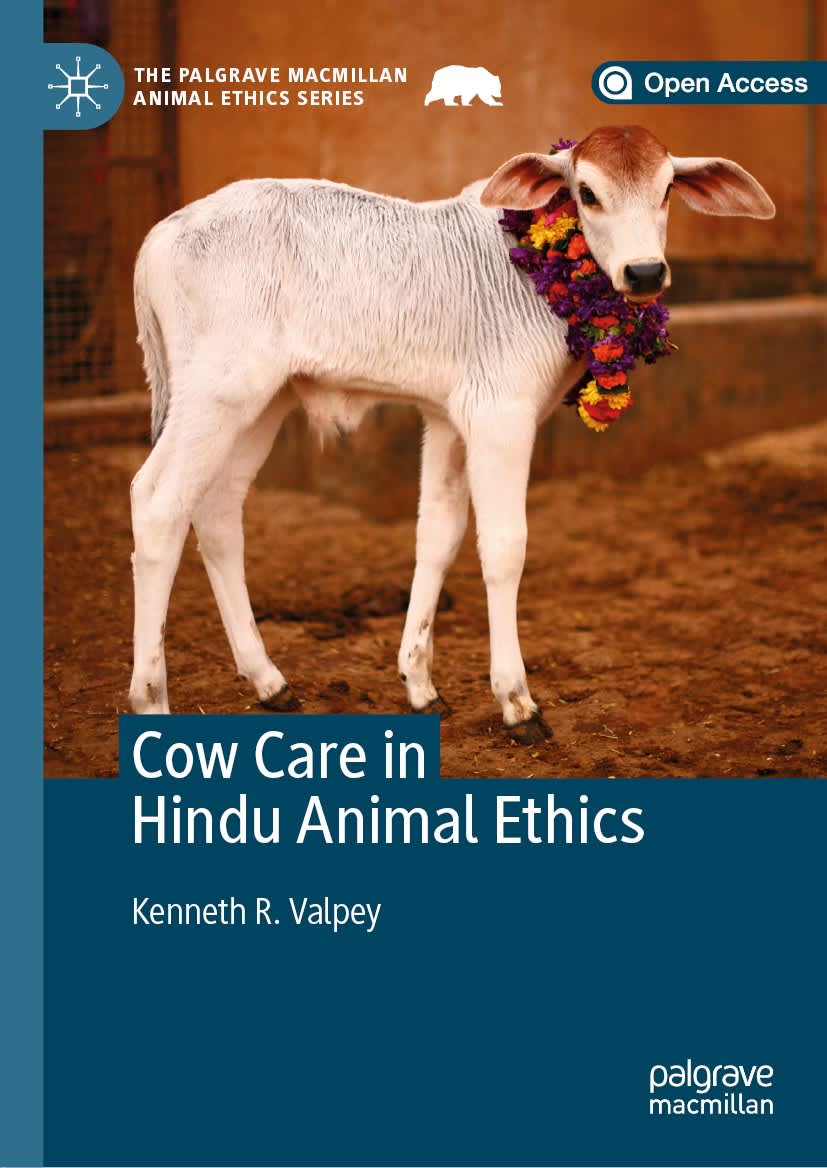 In Gandhi's words "India depended on the cow". This means that she was a mother to her children, but also to us humans.

Exactly. The basic principle is to recognize our dependence on other beings, and in this sense the natural response should be to respect them, care for them and protect them instead of killing them. That is the idea.

Has the Hindu worldview and tradition changed in recent decades? If so, what would be the main reasons for that change?

There have been so many changes over the last few decades in the practice of Hinduism that it is difficult to know where to begin. Of course, there was a lot of influence of modernization and globalization, consumerism has largely taken over India. However, there are still thousands of Hindu temples in India and millions of Hindus go on pilgrimage. For example, I just read about Vrindavan – the holiest place for Krishna worshippers, north of Agra, where the Taj Mahal is located. The Taj Mahal is very famous, but the number of people who visit Vrindavan, the place of Krishna, is much more than the number of visitors to the Taj Mahal. About 15 million people visit Vrindavan every year. So you can say that Hinduism is very much alive in India, but the practice of cow protection is at a very challenging stage due to the mechanization of agriculture and the like. This is the main significant change.

What about vegetarianism as a lifestyle choice in India?

The number of vegetarians in India has been on the decline in recent decades and this, I would say, is largely due to Western influence. People in India like to imitate the West.

In fact, all non-Western nations imitate the West for some reason. How do you explain that?

Well, they think the West must be better because they see more wealth, more comforts of life, things that they think will bring them more happiness. They want to have many things, as others have. How to do it? One approach is imitation. People in the West eat meat, so I will eat meat too. It is a kind of childish mentality.

Do you think that global tourism could be one of the reasons for this?

Of course. Global tourism has an impact. Many people now go to India, and when Indians, especially peasants, see Westerners, they immediately think: 'These people have a lot of money.' Sometimes an imitation of a good thing can be good. Unfortunately, India's struggle with untouchability continues to this day. Both Mahatma Gandhi and B.R. Ambedkar wanted very much to end this social disease, but we see its persistence and I suspect that the deep reason for this has to do with the unspoken thinking that some people are considered less than human. And this is connected with the idea that humans, being the "superiors" of animals, have the right to treat animals as they wish, especially to kill them for food without restriction.